In recent weeks I have received numerous requests for pieces on modern “Witchcraft”, specifically, Wicca. Unfortunately, religion of any type is out of my area of expertise so I put a line out there asking anyone who may have information on the history of Wicca to respond should they be interested in providing a piece for our blog.

Being the control-freak that I am, it takes a lot for me to relinquish control of the blog, albeit for altruistic purposes. I know when I am out of my depth though and in researching the topic of Witchcraft, paganism, Wicca and other modern religions I found that the information was abundant, varied and near impossible for me to put into a will-informed piece that is suitable for public consumption.

Enter Liam Cyfrin, an established author and practitioner of Wicca. Liam has worked on the anthology “Pop Goes the Witch” which covers Witchcraft of the 21st century and has provided several pieces from the work from which I could draw information regarding the modern religion.

That is to say, the article is written by me but the facts within this piece are culled from various sources published elsewhere, so any misinformation perceived is unintentional and could very well be the result of my own misinterpretation of the source material. The source material is cited herein:

“Fire-Light and Moon-Shadows: A summary of Wiccan Lore” by Morning Glory Zell-Ravenheart

“A History of Wicca in England” by Julia Phillips

There was a time, specifically the Burning Times of the late middle ages Europe and later the unfortunate Salem Witch Trials of early puritanical America, where being labeled,or God-forbid, identifying as a witch ensured a wrath of consequences ranging from being ostracized from the community to more health-detrimental being burned alive. (Other means of death were stoning, hanging, and drowning. Because far be it for one method to be decided upon for consistency’s sake.)

When dealing with modern witchcraft it is easy to get caught up in a mire of labels, all of which are interconnected and ultimately lead back to the roots of paganism, which is simply defined as not pertaining to monotheistic beliefs. Instead, Paganism subscribes to a broader polytheistic model where there are numerous elemental gods to whom worshippers may pray to for certain needs.

The irony is that even though Wiccans are looked down upon for their belief, Roman Catholics will pray to various deities (Saints and Archangels) outside of Jesus Christ to fulfill certain needs thereby making them somewhat polytheistic in a round-about way.

Humans are a fickle creature and it is in our very nature to shun that which goes against our own belief system,because how can something to which we so tightly cling be wrong?

It should be noted here that Christianity did not exist as we know it until Jesus Christ was born and fulfilled the prophecy (If you happen to be a Christian). Prior to that there was Judaism which in itself was a hybrid of various “pagan” beliefs constructed to adhere to the widely accepted monotheistic design which was simply established to keep things easy for those who pray.  One God to rule them all if you will.

Prior to the advent of modern religions, modern being a relative term here, Pagans ruled the roost; calendars and holidays were established around their beliefs, around the earth gods and goddesses and various equinoxes symbolizing times of fertility. At that time if someone claimed to be a monotheist, they would be the ones looked upon as an outcast.

But, slowly, Christianity came about and changed things. Because the religion with the biggest following wins. Over time it was expected that everyone convert to the new belief system in a case of forced “out with the old, in with the new”.

Moses came down from the mountain with tablets outlying the new rules, all of which, if broken, were punishable by death. And so it came to pass that anyone not adhering to the “Thou shall worship no other God but me” part was found guilty of violating the law of God and they were put to death as a heretic.

Flash forward to Medieval times when Christianity was the law of the land in Europe. There were still practitioners of pagan religion and it so offended Christianity that priests cried foul and let slip the dogs of war upon people who refused to convert. And so began the Spanish Inquisition, the European tribunal designed to discover and dole out punishment for heresy.

It is estimated that by the end of the Spanish Inquisition and various other “cleansing” that over 264,000 people were killed in what is considered to be the largest atrocity perpetrated in the name of Christianity. Many believe that the numbers are far greater and take into consideration poor record-keeping (intentional and unintentional) of the time.

In all, there was around 200 years of “purification” by various church factions and denominations. 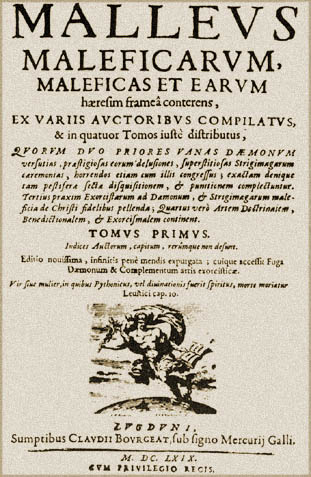 Alleged crimes against Christianity in the name of Witchcraft were fueled in Europe by the Malleus Maleficarum, a guidebook to identifying and killing those suspected of practicing witchcraft. The Malleus Maleficarum was written by Pope Innocent VIII and helped wrongly identify and sentence to death many women, men and even children in what is perhaps the most twisted case of irony. Incidentally, the text of the guidebook exists today http://www.malleusmaleficarum.org/  and it is a frightening glimpse into mass-hysteria that closely mirrors early psychiatric handbooks for identifying and “handling” the “mentally disturbed”.

Throughout these times “Witches” were vilified and painted as creatures driven mad by the devil and presenting abhorrent sexuality and defiance of God. They were depicted as corrupt vessels of Satan who were hideous and out to destroy the purity of all that is holy. And when the church speaks, people listen.

Over time, what was once a religion of peace became a twisted image of its true self, perpetrated by the lies of an over-zealous church. Slowly, the images of witches as we know them today in pop culture formed and terrorized little kids from an early age.

Luckily though, times change and for the most part people tend to become more tolerant of the belief of others, to an extent. In America and in Europe, we tend to look upon the Burning Times and the Salem Witch Trials as a mistake and a shameful footnote in history. A simple “Oops, my bad,” doesn’t seem justice enough though for the countless lives lost to such atrocities.

However, because of a relaxed social climate and paradigm shit in the views of spirituality and Christianity, more witches have “Come out of the Coven” and made their presence known. The stigmas surrounding what many still consider the equivalent of “Satanism” still exists due largely in part to ignorance and continued denouncement by Christianity and other “predominant” religions.

Modern Wicca is a relatively contemporary religion and is classified as Neopaganism, though it is rooted firmly in historical doctrine and practice that pre-dates Christianity.

Modern Wicca rose in popularity due largely in part to Gerald Gardner, a civil servant in Great Britain who cultivated modern Wicca from various writings including the works of Aleister Crowley and even Rudyard Kipling.

Gardner’s modernization of Witchcraft is refered to as Gardnerian Wicca and is the most prominent and influential of the modern Wicca movement though not the definitive or only version of the craft actively in existence for that matter.

There are underlying themes that unite all Wicca as well as other religions with roots in paganism and witchcraft. Among these:

Many practitioners of Gardnerian Wicca also subscribe to the Wiccan Creed written by high priestess Doreen Valiente in her book Witchcraft for Tomorrow published in 1978.

In my research of Wicca it became abundantly clear that the religion is one of peace and love and empowerment and of finding harmony and balance with those we share the world with and with the very world itself.

It is deeply disheartening to have been raised in a world that maligned and destroyed these people. In doing so we wiped out centuries of learnings, teachings, philosophies and principles that could very well have benefitted us as a species. The irony being that the principles on which Witchcraft were founded were the very principles that modern Christianity hoped to aspire to and in their pursuit to attain that goal did so much damage.

This lengthy article is by no means an all-encompassing view of the religion as there could be volumes written on the practices and the tools of the religion. The list of deities alone is staggering and could take several entries to address them all.

Also, it is extremely important to know that this article is not a smear against Christianity, it is just impossible to address Witchcraft without addressing the tumultuous relationship between the two religions.

The main focus of the article is to offer a primer on the religion and perhaps pique your interest enough to continue research on your own into Wicca and other world religions so that we as a people do not live in a bubble and see the world only through whatever lens we wear.

It is about opening dialogue between people of different faiths and perhaps realizing that we are not that different after all. From the Christians, to the Wiccans, to the Muslims, and even the agnostics and atheists; we all have something to learn about each other and that is perhaps the most spiritual goal we can hope to attain.

S.P.I.R.I.T (SpiritSeekers Paranormal Investigation, Research, & Intervention Team) is a not-for-profit organization based out of Little Rock, AR and Frisco, TX. We are dedicated to the research and documentation of paranormal activity in an effort to prove the existence of the paranormal. The journey continues... View all posts by SPIRIT Blog Editor

2 thoughts on “A Spellbinding Primer on Modern Witchcraft”